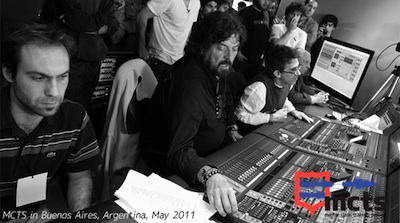 Huntington Beach Academy for the Performing Arts (HB APA) instructor Michael Simmons had the honor of sitting in-studio with legendary audio engineer and record producer Alan Parsons in July. As an APA instructor of over ten years and integral part of APA’s Music, Media and Entertainment Technology (MMET) Department, Simmons has trailblazed the program’s Media department, which instructs students on filmmaking, editing, and live TV directing.

Simmons was invited by Alan Parsons himself to help livestream and direct the 2020 Parsons Art & Science of Sound Recording Master Class, which had switched to a virtual format due to COVID-19. Simmons directed a four-camera live feed of the master class from Parsons’ private studio in Santa Barbara, which was then broadcasted through Zoom for attendees to watch from home.

To prepare for the session, Simmons tested gear remotely: troubleshooting equipment from his residence to learn which gear would work best for the session. Simmons was then invited to sit in-studio while he orchestrated a live feed of Parsons mixing on his Neve 5088 console.

Simmons prides himself on keeping APA’s MMET Department on the cutting edge of music and film technology. The Department has received numerous accolades for its use of technology in the classroom, and was most recently covered by Apple in an extensive article for their Newsroom: apple.com/newsroom.